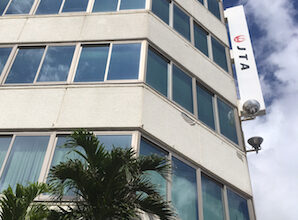 Japan Transocean Air (JTA) announces support for LGBT community by allowing LGBT people to share their miles and inherit mileage from one another. Japan Airlines (JAL) announced to recognize same-sex partners as a family member, allowing them to share their miles this last February. JTA is an affiliated company of JAL. “We decided to take a supportive stand for LGBT community so that we can create a system that accepts and respects diversity in society. We have allowed same-sex partners to share their miles since last February, like other straight couples and families do.” JAL and JTA announced, according to
Read More 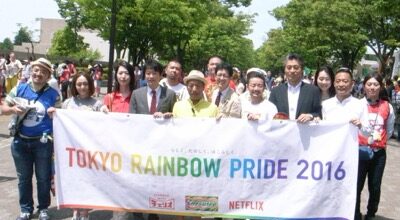 On April 30th, the opening reception of Tokyo Rainbow Pride 2016 was held at a cafe in Tokyo Metropolitan Government Building Observatories. People gathered to celebrate and kick off Tokyo Rainbow Week. Tokyo Rainbow Week was held from April 30 to May 8th. Chiyo Abe, a famous commentator from Fuji Television Network, who was dressed in a GAP-sponsored T-shirt came to facilitate the reception. “LGBT- unfriendly Tokyo is so lame!” Her enthusiastic speech on LGBT measures in Tokyo left a strong impression as an ally on everyone in the reception. Shinya Yamagata, a co-representative of Tokyo Rainbow Pride, declared open
Read More

Right: Ken Marda, Left: Masako Togawa On April 26th, the entire LGBT community in Japan grieved at the sad news that two openly out television talents passed away. One of the two is Ken Maeda, an openly gay television talent, who became very famous for his funny mimicry of Aya Matsuura, a popular Japanese idol in 2004. Ken Maeda appeared in a variety of comedy shows and released his own songs and novels. They all became smash hits. He also played an active part as an actor and a movie director. In 2005, he openly came out in his book
Read More 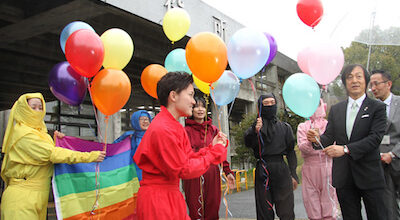 Iga City in Mie Prefecture started issuing same-sex partnership certificates. The first certificate was given to a local lesbian couple.

Being Out in Japan Part 2: The Workplace

By: Roz Back home in Michigan I can legally get married and the next day be fired for it. That terrifying thought is why I have the fear of coming out at work. I could lose my job. But when I asked my wife, Natsuko, why Japanese have the fear of coming out at work, the answer was quite different. She said that it isn’t the fear of losing ones job but the fear of making those around you uncomfortable. Fear that they will treat you differently and you will lose your good relationships with your coworkers. I was stunned
Read More