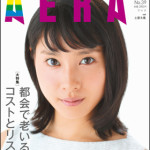 The September 14th, 2015 issue of “AERA”, a news magazine in Japan, (Asahi Shimbun published) published a 10 page special called “The future is clear after meeting you – LGBT”.  The eyes are drawn to the rainbow colored letter A in the “AERA” logo on the cover.
In the contents of “My future is clear after meeting you” various couples are introduced such as a lesbian couple who married at the Tokyo Metropolitan Government 45th floor observation room, Mr. Walter & Mr. Inatsugi who work for Goldman Sachs, Ms. Arita Rika & Sara (happy photo with their child) who work for foreign IT companies, Saori- FTM transgender and his family.  In the column, one lady and her 77 year old father’s male partner were introduced.  Their stories are beautiful and some are tear-jerkers.
In the contents of “Endless journey” for LGBT alliance – “Philosophy of companies that support the sexual minority,” MTF transgender Kawashima Satoshi working at Rush Japan, Ms. Yuki Higashi working at Nomura Securities, and Human Resources Manager Mr. Gary Chandler of Goldman Sachs Japan corporation are introduced.  Through these four individuals and their company’s efforts, “By mutually recognizing the staff working together first, the company’s system could follow” said the author of the article. “There are many things companies can do for sexual minorities”
In other contents, the Bearded Diva, Mr. Conchita Wurst was featured at “Society is not as intolerant as you think”. Also, Mr. Tim Cook, Mr. Elton John, Ms. Jodie Foster and Ian Thorpe were introduced at “Come out and change the world”
The last contents of this topic, they feature Tiffany’s “Will you?” campaign that started from January 2015 using a global photographer, Mr. Peter Lindbergh. This wedding ring campaign made a major impact on the world as a breakthrough initiative, because the world’s leading jewelers have come up with same-sex couple jewelry advertising, and gay couples in New York were chosen as the models.” This advertisement featuring a gay couple was published on the first spread of pages of this magazine.
AERA featured LGBT topics previously, topics such as Tokyo Lesbian & Gay Parade in 2001, LGBT situation of Cuba in 2009, and Job Hunting forefront of LGBT in 2012.