Being Out in Japan Part 1: Public Display of Affection 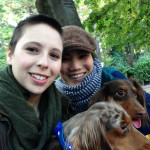 Natsuko and I first started dating in February 2013. There was no talk about same sex marriage or any laws protecting LGBTQ  in Japan at the time. It wasn’t illegal either. I remember feeling terrified to show affection in public in Japan in fear that someone would attack us. When we held hands I felt myself watching everyone’s eyes around me preparing my body to move quickly in response to a sudden strike. When we went out to dinner I felt afraid to show we were a couple and not friends. I often felt uneasy and couldn’t relax.

It’s hard to imagine Natsuko and I walking around in fear not showing displays of our love. It’s hard for our friends to think we use to be like that as well. Because we’re always ourselves at home or out in public. Everywhere we go we are ourselves, a beautiful loving same sex couple. What changed? Was it because now there are more laws for LGBT being placed? Did the citizens start to accept us? The answer is we changed. We realized back in 2013 that our fear was in our heads. We came out to friends and family, it was hard at first but now we have a good relationship with each other’s families.  Coming out helped us to throw away our fear of public displays of affection. 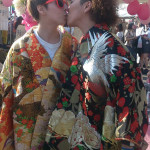 We hold hands and kiss in public often in Japan. The only place we don’t kiss is on a train, bus, or subway or at the hot springs. For all couples, same sex or not, it is culturally rude to kiss on the trains or subways or buses. It is a small tight space and it could make people uncomfortable. But while waiting for the train at the station, sharing a kiss is okay. As for the hot springs (onsen), it is very nice that same sex couples can use the same baths together, other couples must split between men and women. I am happy I can go to a hot spring with my fiancé and enjoy the experience together. We do not show signs of affection at those places because it is a public bath for families not a place for two naked women to be kissing.  This should be obvious to why it would be culturally rude. However we are not nervous or strange while in either of these situations, we respect the culture and the rules of the onsen.  When I respect the Japanese culture I am also respecting my fiancé’s culture. She taught me what was not okay. There isn’t a sign that says “no kissing on the train” like there is signs saying “put your phone in manner mode”. We respect the culture but respecting a culture doesn’t mean treating yourself different because you are a same sex couple. We don’t want to be treated different than any other couple so we will not act different in any situation or place. 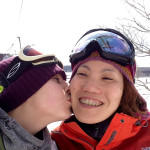 Besides the hot springs and on trains, subways or buses, we kiss and hold hands and have romantic dates anywhere in Japan. Japan is very safe and not one person has ever said anything bad or nasty to us. Most Japanese don’t show a sign of noticing us. We haven’t met anyone who wasn’t kind to us and accepting of us. We never worry about being attacked or treated wrongly by anyone here. There was one situation, in all of the three years we have been together, that a nurse at the hospital refused to acknowledge our relationship. Another nurse noticed and took over and helped us instead. Things like this might happen, but rarely.

Natsuko and I walk our dogs throughout Kichijoji and have romantic dates in the park nearby. We go shopping and hold hands strolling through the stores. We take cute kissing selfies in front of famous site seeing places. We do all the things any couple would do here in Japan. We love being “out” in Japan. Japan is our home, and nothing is more important to us than having a safe home to be comfortable being us.