Democratic Party of Japan has made a decision to submit a bill to the Diet to eliminate discrimination toward LGBT people in Japan. 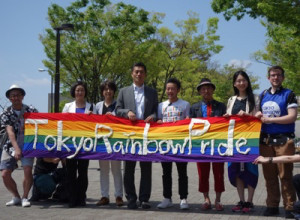 Democratic Party of Japan has decided to submit a bill to the Diet to eliminate discrimination toward LGBT people in Japan. The bill will be submitted to the Diet on January 4th, 2016. The legislation will ban discrimination toward LGBT people by businesses and local governments. It will also require schools to establish a counseling system for those who identify as LGBT and promote understanding of the issues facing them.

According to the outline created by the DPJ’s working team, discrimination based on gender identity and sexual orientation will be banned. It also bans discrimination toward non-LGBT people based on speculation.

The legislation requires schools to establish a counseling system and promote understanding of LGBT people among teachers and students. Employers will be required to make a LGBT-friendly work environment through training programs. The bill will include a provision that acknowledges same-sex partners and their rights.

Last April, Japan Alliance for LGBT Legislation, consisting of 58 LGBT- related groups, released a report of 250 cases of discrimination based on gender identity and sexual orientation. These are some quotes from the report. “I talked about my sexuality to my teacher and he told me that I would never get a decent job.” “My boss was drunk and he yelled and told me that I was a faggot and disgusting.” “My ex-partner was stalking me, so I talked to the police, but they just made fun of me and didn’t take it seriously.”

A party policy chief, Goshi Hosono announced that he would start to consider the bill last February. The DPJ has been working on it since April.

On December 24th, Hosono visited Hiroshi Hase, the chairperson of a LGBT-related alliance and asked him to cooperate on the outline and co- sponsor the legislation. In response, Hase showed a positive attitude toward the bill. Hosono and Hase will jointly submit the bill to the Diet next year.

There are a series of backlash against LGBT people and their human rights among local councilors and local officials and Japan is behind the international community in human rights of LGBT people. If this legislation was passed, it would greatly contribute to elimination of discrimination toward LGBT people.

It is the first of its kind in Japan that a legislation, which bans discrimination based on sexual orientation and sexual identity, will be submitted to the Diet. In 2016, whether or not the legislation will be passed will be the biggest topic for LGBT people in Japan.