Recent years have seen steady progress on the movement of LGBT by the parties in charge. Based on the cooperation by great numbers of supporters, “Partnership Oath System” has been implemented since 1st Jun. 2017, and “LGBT Friendliness Index System” also has been put into action since 1st Oct. 2017 in Sapporo.

In 2018, the committee was organized by LGBT members and a lot of supporters, and then `Sapporo Rainbow Pride 2018` was held as an interactive activity in 7th Oct.
Under all the history and efforts that our predecessors made, we will hold `Sapporo Rainbow Pride 2019` in 15 September 2019. It will be great pleasure and gratitude with your participation and cooperation in order to realize the world that makes each of us lives together as a way of life for ourselves with understanding diversity and dignity. 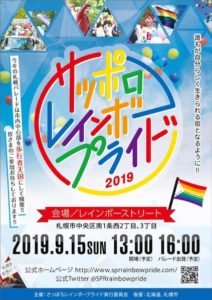 【Time Table】
13:00〜 Start accepting for the Parade
Please, come to check in at the reception for parading.

Before the beginning of the parade, you can fully enjoy looking around various booths in Rainbow Street, watching performances on the stage, or listening to public talk by gorgeous guests!!

A variety of placards written by several messages will be prepared. Participants can take one of them or hold a placard made by yourself, and finally start parading!! Why don’t you march on as your own style? And, don’t forget to get a balloon!!

Please, notice that lining up will start from 15:30.

When you come to the goal point of the parade, the high-lighted event, which is balloon release, will be taken place at Odori Nishi 3 Chome, and then it will be ended with a commemorative photo taken.