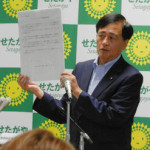 As of July 29th, Setagaya wards in Tokyo reported the outline proposal for public documents acknowledgment of same-sex couples. Although a specific effect of the documents issued by the district are not specified in the outline proposal, same-sex couples are likely to be treated similar to spouses of the opposite sex marriage in the context of such visitation at the time of emergency in a hospital and rental housing tenants, etc…  It is expected to precede the elimination of prejudice and detriment to sexual minorities (LGBT).  Setagaya Wards plan to issue the documents to the prospect in November 2015.
According to the outline plan, if under oath, same-sex couples in the ward will then receive a copy of the stamped oath and the certificate of receipt will be issued. In order to oath, both of them should be over 20 years old and living in the city, or, one is to live in the city but the other is scheduled to move in.  Guardian of contracts and/or notarial deed is not required. Setagaya Wards keep the oath for 10 years (However, document can be discarded if both parties in the couple wish to)
Guidelines, which has shown the affairs of the purpose and procedures of local governments, voting of Congress as regulations are not necessary, it is one that can be developed in emirate.
This news, decorated one side of the Tokyo Shimbun – a leading newspaper (Six Medias visited for interviews)
In February 2015, right after the announcement for proposed ordinance to issue the partnership certificates to same-sex couples by Shibuya Wards, Setagara Wards was showing signs to follow this.  Setagaya Ward will be the second case of local government in the nation to publicly approve the partnership of same sex.
In Shibuya ordinance enacted in April, corresponding businesses are to marry same-sex couples, in addition to issuing a partnership certificate. It is seeking a fair and appropriate response to the people and provisions of the business’s name is published if discriminatory acts are not corrected. Shibuya Ward’s began issuing certificates at the end of October.
On the other hand, there is no provision for obtaining a fair response to the operators at the outline proposal in Setagaya Ward.
On this day, in the ward parliament residents living Standing Committee, Subdivision Parliament pointed out “It will have no meaning if we do not consider the specific effects such as the business operation in each cooperation when same-sex couples show the oath to them”, and Setagaya Ward replied “It makes sense if municipality face to sexual minorities as a first step of awareness in this matter” and strongly explained the importance of these guidelines.
The person in charge of Setagaya human rights and gender equality department said “This incident will be a help to eliminate the discrimination to foreigners and sexual minorities, and mutually recognize diversity, for women and the elderly as well”