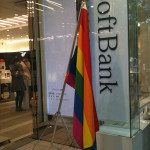 As of July 18th, KDDI announced family discounts for mobile phones, home phones, and internet will be applied to same-sex couples who have a public certificate issued by certain institutions such as Shibuya.
Previously, they only accepted documents that prove a family (such as a resident card), and same-sex couples were an exception. However, after Shibuya-ku, Tokyo acknowledged same-sex couples as “relationship corresponding to marriage”, and worldwide debate over the advocacy of sexual minorities became active, these two corporations decided to come up with this policy. They, of course, offer this service to people who will have similar certificates in other municipalities such as Setagaya-ku, Japan.
Following this, NTT docomo, announced the same strategy/service as au & Softbank on July 21st. They said “This service is to provide convenient usage for more of their customers”.
In addition, Softbank already offered family discounts to same-sex couples who prove two persons are living at the same address and this service will continue same as before. (Please be advised that this service was announced at Tokyo Pride festival in 2009. Thereafter, Softbank sponsored the Pride event many times, and continue to show us their LGBT friendliness). Product marketing team of Softbank said “Basically, we capture a family as the reality of life, and same-sex partners is not an exception, in order to provide a fair service and equal to all of the people” (Referred by GQ Online 2011).
In response to the decision by the Federal Supreme Court legalizing same-sex marriage in USA on June 26th 2015, businesses that target the LGBT have been attracting attention.
In Japan, in response to the new regulations of Shibuya-ku, in addition to the above-mentioned mobile phone companies, Life Insurance Company is considering service to LGBT, and this movement will surely spread in the future.