Koizumi, from OUT JAPAN, and Ikeuchi, from Hotel Granvia Kyoto, received an award for “Ambassador” of The Year in IGLTA 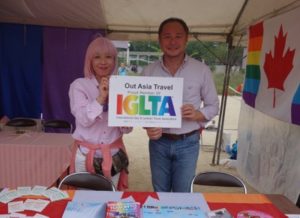 Shintaro Koizumi(right side) and Shiho Ikeuchi(left side) have participated with IGLTA booths in almost all pride event in Japan since they were appointed to “Ambassador”.

Shintaro Koizumi(right side) and Shiho Ikeuchi(left side) have participated with IGLTA booths in almost all pride event in Japan since they were appointed to “Ambassador”.Shintaro Koizumi, the president of OUT JAPAN Co.,Ltd known for its LGBT inbound tourism and corporate consulting, and Shiho Ikeuchi, the general manager of Hotel Granvia Kyoto known for its LGBT-friendly wedding services for international visitors, received an award for “Ambassador” of The Year in International Gay & Lesbian Travel Association(IGLTA). Both of them did great jobs as “Japan Ambassadors”

※“Ambassador” means an ambassador-like person who is in change of advertising activities of IGLTA in his or her designated areas. IGLTA chooses one “ambassador” in each area.

IGLTA holds a general assembly once a year. For example, it took place in Los Angeles and award ceremonies for 8 awards were held last year. The President of Obama received The Chair Award and Los Angeles LGBT Center received Community Honor. This year’s general assembly will take place in Cape Town and Koizumi and Ikeuchi will be commended in front of hundreds of participants.

Last year, big news came out that Nara City announced it would join IGLTA and it is the 1st municipality that joined IGLTA. The number of Japanese travel and tourism-related organizations and businesses dramatically increased by 11 to 25. It is the highest number in Asia and “Ambassador” of The Year will be given to Koizumi and Ikeuchi for this great effort.

Koizumi said that “I am very honored to receive ‘Ambassador’ of The Year and became the 1st asian to receive this award. I am convinced that making Japan more LGBT-friendly will increase LGBT inbound tourists in Japan and talked each company into joining IGLTA. From now on, I would like to exchange opinions and cross-selling with other businesses and come up with a variety of measures to do joint exhibitions in each LGBT- related event to generate benefits for each member.”

There are many world-wide LGBT events such as Mr.Gay Contest, World Out games, World Pride, and ILGA World Conference, but none of these events or LGBT events like these have not been held in Japan yet. (In Asia, ILGA World Conference was held in Manila in 2003 and Mr.Gay Contest was also held in Manila in 2011. World OUT Games will be held in Taiwan in 2021.) There is a high possibility that IGLTA’s general assembly will be held in Japan. Given the fact that Koizumi and Ikeuchi received the award, I think the possibility is rising.