Kunihiro Maeda of Bunkyo Ward openly came out as gay at the news conference of LGBT League. 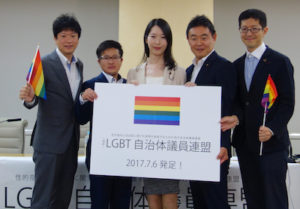 Photo at press conference about LGBT League. Kunihiro Maeda is second person from the right.

On July 6th, five LGBT assembly members, including Aya Uekawa of Setagaya Ward, Taiga Ishikawa of Toshima Ward, Wataru Ishizaka of Nankan Ward, Tomoya Hosoda of Iruma City and Kunihiro Maeda of Bunkyo Ward, held a news conference to announce that they have set up a league for protecting the rights of sexual minorities. Kunihiro Maeda of Bunkyo Ward came out as gay for the first time in public.

Country-level policy measures that aim to ban discrimination against sexual minorities have not been promoted yet in Japan. However, the start of same- sex partnership system in Shibuya and Setagaya Wards has made differences in local municipalities, letting more local assembly members rethink about same- sex marriage. Even in those countries where same-sex marriage is legal, grass-root campaigns in local regions played an essential part in establishing country-level policy measures. LGBT league tries to follow the same steps and make that happen in Japan.

Its official website has not yet been made, but LGBT League is going to hold special seminars in the ward office of Toshima Ward on July 27th and 28th in 2017. (The names of the assembly members who support the rights of sexual minorities will probably be listed on the website. People will know who to contact with LGBT-related problems in their region. ) Ken Suzuki, a professor who made a great contribution to the establishment of same-sex partnership system in the city of Sapporo, will attend the seminar.

At the news conference, Kunihiro Maeda talked about his coming out story and the death of his partner with tears in his eyes.

“I lost my partner of eight years in 2002. He was at home when he suddenly lost consciousness. He was immediately carried into the hospital, but I could not enter ICU with him because I was not regarded as ‘a family member’ and no one told me anything about what was going on with him at that moment. Fortunately, his parents came to the hospital soon and told the doctors that I was his family and let me in. It was then that I actually faced the harsh reality that being my partner’s roommate and being his actual family were different. At his funeral, I was forbidden to sit along with his family and relatives because his grandparents did not understand our relationship. Thanks to the kindness of his parents, I could take some of his belongings after the funeral. Our apartment was under his name, so I was afraid of getting kicked out. There is nothing I can do when someone says ‘you are not his family.’ I am just ‘someone he knows’ with no legally- binding systems that recognize my status as a partner. ”

I was in my 30’s at that time. Now I am 52 years old, the same age when my mother started to have dementia. I have started to think about aging and my death more seriously than ever. The first generation that decided to live as gay without going into a lavender marriage has become so old that they have started to face the problems of illness and nursing their parents. The number of gay people who will commit suicide or leave their jobs to take care of their parents is expected to be on the rise. Discrimination and prejudice against gay people will probably keep them away from public support and end up being isolated. If we do nothing about this matter now, the situations will get much worse.

It’s hard for those involved to speak up for themselves. I was too scared to openly come out as gay before, too. When I was first elected, I received a letter that was filled with gay slurs. I had only come out to a few people, but some of them had told others about my sexuality. As an assembly member, the risk is always there. But I am in a position that can establish systems for sexual minorities and speak up for them. I thought openly coming out as gay might help gay people share their stories with me and give me more opportunities to support those isolated from the public and their community better than before. I hope to achieve a society where there are legal systems that help LGBT people and individual diversity is embraced. A society where everyone can be who they really are and live with people they love is what I dream of. LGBT is not just for young people.

LGBT people exist in every generation. I hope me coming out as gay encourages people and makes differences for the future.”

Hidetoshi, Mr.Maeda’s deceased partner who passed away in 2002, was one of the committee members of Tokyo International Lesbian and Gay Film Festival in the late 1990’s and he often participated in gay parades. He is the founder of the very first support group for parents with a gay son. He made leaflets about gay people and distributed them to the parents. Both Hidetoshi and Mr. Maeda were very important figures in the LGBT community in Japan.

That’s why the news of his death shocked all of his friends. A lot of gay people gathered to grieve over his death at the funeral. Mr. Maeda managed to overcome his loss and worked so hard to establish an ordinance that bans discrimination based on sexual orientation and gender identity in Bunkyo Ward. He greatly contributed to the making of guidelines on sexual minorities for city officials as well. In 2007, he worked hard for Kanako Otsuji in the election. He is a member of Good Aging Yells, too. His modest character has been always loved by the people in the LGBT community in Japan.

People who know Mr. Maeda must have found themselves very close to tears when he openly came out as gay at the news conference. His deceased partner, Hidetoshi, might have been there for him at that moment.