LAWSON, INC. is to improve its working conditions for LGBT employees. 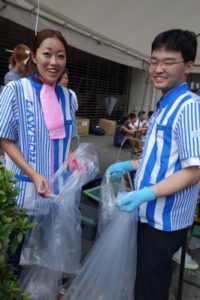 The Nikkei reported LAWSON, INC., the second largest convenience store in Japan, started a new team aimed at improving its working conditions for LGBT employees. The team consists of four employees from the personnel department and is striving to achieve a better understanding of LGBTs among all the employees.

The new team invited experts in LGBT issues to its first in-house seminar and approximately 50 employees working in the headquarter learned a basic knowledge of sexual diversity and the issues facing LGBTs in the workplace in Japan and in other countries.

As part of the initiatives to improve its working conditions, LAWSON, INC. changed its job application form and the owners of LAWSON member stores and their employees do not have to show their sex on their job profile. LAWSON, INC. also removed the gender section on the application form for Direct Mail, which is a system where the employees can send their opinions to the executives.

More efforts will be made for its LGBT employees.

By the way, the shop staff working in the LAWSON store on Shinjuku 2chome Street have been very supportive for the last few years and they clean up the street during the period of Tokyo Rainbow Festival every year. “Thank you so much for your kindness.””That’s impressive!” These are the voices from 2chome goers and they appreciate their hospitality.

Many major companies have announced their new measures for LGBT employers since last year, but LAWSON, INC. is the first convenience store in Japan that tries to improve the working conditions for them. The influence brought by this new initiative is estimated to be huge given the fact that everybody uses convenience stores every day in Japan. We are all looking forward to their new moves.