“LOVE IS STRANGE” offers “Couple 50% OFF” discount to same-sex couples. The first trial of its kind in the film industry. 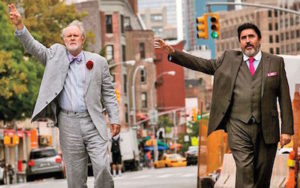 “LOVE IS STRANGE” is about a gay couple living in NY who has been together for 39 years and the gay couple faces happiness and unhappiness of marriage when they decide to get married. “LOVE IS STRANGE” will be open to the public in “CINEMA SWITCH GINZA” and other theatres on March 12th. Regardless of sex, any couple including same-sex couples who are 50 or older can get the 50% off discount. That will be 1100 yen for each. This is the first trial of its kind in the film industry.

In order to get “Couple 50% OFF” discount, either of you needs to be 50 years old or older, so you need to show cinema staff something that can prove your age. You do not have to have a same-sex partnership certificate to get the discount.

“CINEMA SWITCH GINZA” is a wonderfully LGBT-friendly theatre in Tokyo. The theatre has screened a lot of LGBT films such as “Any Day Now” and “Pride” for long. Moreover, a person in charge of advertising “LOVE IS STRANGE” is gay(he worked very hard for TOKYO INTERNATIONAL LESBIAN&GAY FILM FESTIVAL) and this first discount trial would have never happened without his effort. (please give it up for him)
Here is a comment from a 53-year-old gay guy who saw “LOVE IS STRANGE” with “Couple 50% OFF” discount.
“The very mature gay couple. Their ways of living cause a lot of changes in the minds of people living around them. One more important thing is that they are fighters. They fight against discrimination and prejudice they experience on a daily basis. They always fight and never run away. At the beginning and the end of the film, you hear Chopin’s ‘Lullaby.’ It is played as if it embraced the gay couple with love. The beautiful melody sank deeply in my heart and every move of the fingers on the keyboard seamlessly breathes a life into ‘Lullaby.’”