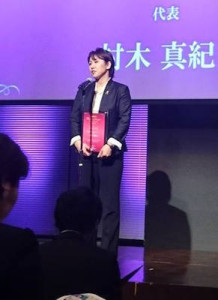 On December 7th, Nikkei WOMAN gave an official announcement about the winners of “Women of the Year 2016” award and Maki Muraki, the leader of nonprofit organization Nijiiro Diversity(Rainbow Diversity), received “Change Maker Award.”

The purposes of “Women of the Year” are (1)to show role models of working women, (2)to shed a light on individual achievement which tends to be forgotten easily, and (3) to analyze the social changes those women have made. “Women of the Year” has awarded a lot of women since 1999 and marked its 17th anniversary this year. Probably, Maki Muraki is the first out lesbian to receive this award.

The winners of “Women of the Year 2016” award are 7 women including Tamayo Sunaga, who is widely known as the founder of “Hurusato Choice,(Hometown Choice),” a website which allows tax payers to allocate some of their residential taxes to their hometown they are not currently living in. The reasons why Ms. Muraki received the award is, Nikkei WOMAN says, “she has been working hard for LGBT people, who accounts for about 5 % of total population in Japan, to improve their workplace environments since 2012. Using her experience as an consultant, she has visited more than 50 companies and has delivered lectures and consulting services to municipalities as well more than 100 times. Thanks to her effort, more companies have started to stipulate ’No discrimination based on sexual orientation and gender identity’ rule in their in-house regulations and have started to offer services to LGBT consumers. She is advocating LGBT-friendly measures in many companies.”

On December 7th, the award ceremony of “Women of the Year 2016” was held in Tokyo. In her speech, Ms.Muraki said to the audience “I work as an out lesbian consultant, but there are many people working in many companies, who have openly come out as members of LGBT. And I can see them here tonight.” Right after that, many of the audience proudly started to wave their hands to Ms. Muraki. Some of the audience seemed very surprised and clearly they did not expect that many LGBT people were all around them.
Mariko Kawano, one of the judges(the leader of “Carian,” development of human resources consulting company), turned to face Ms.Muraki with a smile and said “I am wearing a rainbow suit today. As a LGBT person, you have made changes in society by getting supporters and by making LGBT allies for years. You’ve made a paradigm shift with your great consulting skills in our society.

I asked her to leave a comment about that night and the award. Ms.Muraki told me about her hopes and positive outlook for the future.”Today, it proved that heterosexual cisgender women are not the only women who can receive “Women of the Year” award. I think I could expand the definition of ‘woman’ on that point. I think women empowerment and gender equality promoted by Japanese government are important,but I hope many more LGBT-friendly measures will be taken and those who are in struggle with their sexual orientation and gender identity will be saved in the future.”