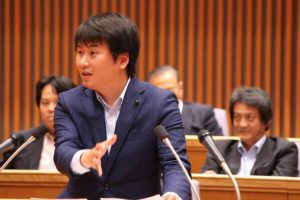 On June 30th, Toshinao Inamori, an assemblyman in Mie Prefecture submitted a written opinion that asks for abolition of discriminatory treatments against sexual minorities and improvements of LGBT rights in Japan. Mie Prefectural Assembly passed the written opinion unanimously.

Mie Prefectural Assembly is now petitioning the Japanese government for establishment of laws that would ban discriminatory treatments against LGBT people in Japan. Mie Prefecture became the 4th local municipality that officially recognizes same-sex couples this year and the written opinion is to prevent those same-sex couples from getting discriminated when they start to live together as a couple. This is such a breakthrough for LGBT community in Japan.

The following is the full text of the written opinion.

“In our country, we cannot deny the fact that a number of sexual minorities still live with discrimination. They are perceived as abnormal and subject to unfair treatment at workplace and school. Suicide rates of sexual minorities are very high because of the environment where they cannot easily talk to somebody about their sexual orientation and identity. Despite the status quo, the survey conducted in 2015 says that 7 percent of Japanese population are sexual minorities.
There are many cases in other countries that sexual minorities play active roles in businesses and politics, both at national and local levels, without facing discriminatory treatments after they publicly come out.
Some of local municipalities in our country also recognize same-sex couples as equivalent to ‘married’ and issue partnership certificates in order to reduce obstacles they face in their everyday lives. This kind of measures has drawn much attention.
We can achieve a society where every one of us can fully play active roles, embracing our own uniqueness by accepting and embracing our individual differences and our diverse lifestyles.
G7 Ise-Shima summit was held in our country last May. It has great significance to our country to follow the global standards and go with the global flow that respects fundamental human rights and embraces diverse ways of living.
Therefore, we strongly demand that Japanese government recognize sexual minorities and enact legislations that ban discriminatory and unfair treatments
against them and same-sex couples in their everyday and social lives in order to achieve a society where every one can live freely.”
Last June, Mr. Inamori, an assemblyman of Mie Prefecture raised questions about
legal measures for sexual minorities in Japan. Taiga Ishikawa, an assemblyman of Toshima Ward, Tokyo, was also invited to a open seminar on problems facing sexual minorities and discussed with the governor issues of same-sex partnerships, housing and education.

Last September, Toshiko Kojima, an assemblywoman of Mie Prefecture, asked Mie Prefectural Assembly to “declare support for sexual minorities as a local municipality when G7 Ise-Shima summit takes place next May.” The assembly answered that “we will work on it as a matter of fundament human rights.” “We can attract more overseas tourists by holding seminars for people in travel industry and achieving better understanding of sexual minorities.” Ms. Kojima appealed to the assembly the importance of the declaration of support for sexual minorities. The personnel from Environmental and Community Affairs Department answered “it takes time for the understanding and acceptance of sexual minorities to take root in our society, so we need to start step by step.”
And finally, Iga City, Mie Prefecture, started issuing same-sex partnership certificates this April.