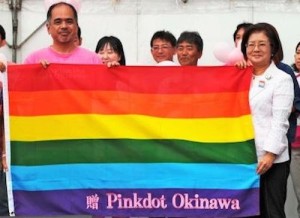 Right side woman is the Mayor of Naha City, Mikiko Shiroma. Left side man is a representative of Pink Dot Okinawa, Hideki Sunagawa.

Naha City, the second municipality in Japan which made a declaration of its LGBT supports called, “Naha, the city of sexual diversity (Naha Rainbow Declaration)”at Pink Dot Okinawa in last June, announced that discussions are going to take place regarding same-sex partnership certificates which recognize same-sex couples as equivalent to marriage and introduce an ordinance for same-sex couples in 2016 or later. The city is planning to visit Shibuya and Setagaya wards which have already started issuing same-sex partnership certificates and get advice from the pioneers in those wards.

On December 10th, in Naha City council, Gengo Kuba, the chief of the general affairs department, answered a question, asked by Shiegeharu Furugen, a councilor of Japanese Communist Party, about future measures for LGBT people. “We are going to exchange opinions on same-sex partnership certificates with the parties involved in the LGBT-friendly measures in Shibuya and Setagaya wards.” Naha City announced that they are going to consider the enactment of new ordinance and how they spread this partnership system to hospitals and private businesses as well.

Since the “Naha Rainbow Declaration,” the city has provided various services for its citizens to raise the awareness of LGBT people and the issues facing them. In addition to that, the city is trying to hold seminars for city officials so that they can confidently deal with LGBT people while at work. Naha City Board of Education is going to offer trainings to school personnels to achieve the better understanding of LGBT people from next year. The city is also going to create leaflets and posters to promote acceptance and understanding of the new ordinance and LGBT people among the public.