Naha City is to become the 5th municipality that officially recognizes same-sex couples and issues same-sex partnership certificates. PinkDot Okinawa is to hold a wedding for a local gay couple. 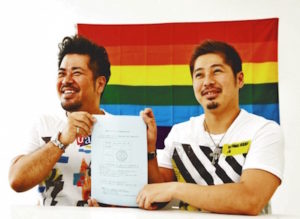 According to the mayor of Naha City, Mikiko Shiroma, the same-sex partnership certificate is given to a couple after the mayor receives and accepts their application form. Same-sex couples are registered as equivalent to “married” with the submission of their certificate of residence that proves they have finished moving into the city within the given period of time. The mayor allows same-sex couples to use their common name in the case of gender dysphoria. The same-sex partnership certificate does not have legal effect when it comes to engagement, inheritance, and tax exemption, however, the city will ensure that registered same-sex couples are treated equally as family in medical institutions and private housing agencies. Naha City is now finding the way to make the certificate have more power and expand its benefits to local private businesses in the city.

The mayor, Mikiko Shiroma said “I would like to ask everyone living in this city to understand that our city is trying hard to eliminate discrimination and prejudice.”

On July 11th, applications for the same-sex partnership certificates started to be accepted and Junji Irimaji (from Naha City) Naohiko Azama (from Ginowan City) became the 1st officially-recognized same-sex couple in Okinawa. “We’ve been waiting for this day for so long. We are so happy right now. We want everyone to know that Naha City has this partnership system for LGBTs and we want to thank everyone for supporting us.” said, the couple. 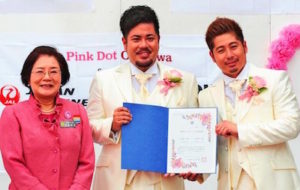 On July 17th, The 4th PinkDot Okinawa was held in Okinawa and approximately 1500 people came to the event.

At the end of the event, the couple, Junji Irimaji and Naohiko Azama who were dressed in a white tuxedo, came up to the stage holding each other’s hand and a pink bouquet. The two exchanged their rings together and kissed for a while. In their speech, they said “we want to thank everyone for supporting us and we want to cherish this partnership until death do us part.” The audience applauded loudly.

Mr.Azama’s younger sister, Yuko, made a speech with tears in her eyes. In her speech, she said “when I found out that my older brother is gay, my family and I got so confused at first. But as we saw him getting happier and happier with Junji, we were very surprised and finally understood that it does not mater if you love a man or a woman when it comes to love. Being who you really are. That’s what matters.”

On behalf of their friends, LINA, one of the members of an Okinawan idol group “MAX” came up to the stage. “I am so proud of their love and courage. I want to take actions so that we can take further steps to make this world more LGBT- friendly, too.” LINA expressed her joy with tears in her eyes.

The event had another surprise. Mika Nakajima, one of the most popular singers in Japan and a common friend of theirs, came to the event to celebrate their new life. She sang her songs for them.

Ms. Shiroma, the mayor of Naha City, said to the couple “it is great pleasure if this certificate can give many a lot of hope and lead to better understanding and acceptance of LGBT people in Japan. It is significant to finally recognize this lovely union as a couple who’s trying to have a wonderful life together.”

Hideki Sunagawa, a co-representative of PinkDot Okinawa, said “their wedding is the hope of many LGBT people living in Japan. We still need more people to k now about us. Same-sex partner system is just the first step.”