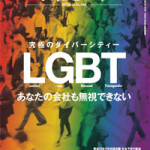 The cover of the August 24th, 2015 issue of Nikkei Business was colored in the rainbow, and the character of “LGBT” was dance. The main feature title was “Ultimate diversity LGBT- Your company cannot ignore.” It was a great feature total of 22 pages. This is the second LGBT feature since 2007.

In the “Two realities that you do not know” introduced 2 cases. One is people who struggle with working for a LGBT unfamiliar company, another is global companies that embark on LGBT support. This section said, we should not ignore these facts using words “We did not know…”.
In the “Basic knowledge of LGBT” shows the latest estimate of 7.6% of the population in Japan is LGBT, and also introduces LGBT persons leading in the world such as Tim Cook (Apple CEO) and Christopher Bailey (Burberry CEO).
In the “Anguish for 10 million people- If left for them, it will be a problem for companies”, introduced Shibuya-ku’s case which an approval for same-sex partnerships makes a big influence for Mr. Hasebe’s election as a new mayor. To consider this case, we can say that “Voters saying NO to the current situation suffer a disadvantage”, and many corporations have to face this fact. It is also clearly told how to improve the working environment for same-sex couples who have trouble in their usual life and work.
In the “New market spread if you step in”, in order to capture the LGBT as human resources and consumers, company’s action is required. Rather than choosing a short cut, it is better to understand and support LGBT first, if a company would like to target this market. The advanced companies such as Hotel Granvia Kyoto have already called for changing the consciousness to management for this potential market. For your information, Hotel Granvia Kyoto became a hot topic to organize a same-sex wedding of Presta as a LGBT friendly hotel.
In addition, under the heading of “Real image 1-7 of 7.6%”, several interviews of LGBT influential 7 persons such as Prime Minister of Luxembourg – Mr. Xavier Vettel, Executive of Microsoft – Ms. Sean Chu, Transvestites Tokyo University professor – Mr. Ahn Tomifu, and Yuko Masuhara have been published.
Not only that, in the “Editor-in-chief’s point of view” on page 3, the editor’s intention is to  provide this feature/article for readers who do not know these facts, because LGBT influence to companies/society might be the same ultimate diversity as “women’s social advancement”. Also, Prime Minister Vettel’s words are published in the corner of “This week of Witticism” next to the “Editor-in-chief of perspective”
Also, Nikkei business ONLINE, started a column series associated with this feature from August 24th. Some reporters define a single theme, and write/add a new important point. These articles are heavily shared and spread throughout the world;
http://business.nikkeibp.co.jp/atcl/report/15/082000028/082000001/
http://business.nikkeibp.co.jp/atcl/report/15/082000028/082000002/
http://business.nikkeibp.co.jp/atcl/report/15/082000028/082500003/
http://business.nikkeibp.co.jp/atcl/report/15/082000028/082700004/
Nikkei Business had an impact on the business community in Japan in the April 16, 2007 issue in the feature called “Dig out the sleeping market – LGBT”. Since this was the first time LGBT topics were featured, they intended to say, “The LGBT market in Japan has 6 trillion yen!” Or “Sexual minorities have high disposable income”, an exaggeration for the LGBT market. Of course, not only that, other topics such as a roundtable discussion of LGBT students, the approach for easy workplace to LGBT at IBM corporation, and overseas-sex marriage situation had been introduced
After 8 years passed, the article for LGBT market has been changed. It used to be a main topic “Story of companies targeting the potential market”, however, it has been changed to “Management have to understand the LGBT and improve the discrimination that is going on in the workplace, and become a supporter, otherwise, companies cannot ride on the wave. This is an extremely large and important change, because it may come true that sexual minorities are not discriminated at every workplace in Japan.
Needless to say, this change was made by the trend of the times with actions by “Yodogawa-ku in Osaka issues a support declaration”, “Shibuya recognized same-sex partnerships“, and many corporate supporters to LGBT market and also the contribution of those people who became a bridge between the community and companies/government.
It is exciting to imagine the kind of topics/features for the LGBT market that will be written 10 years later at this magazine/online service.