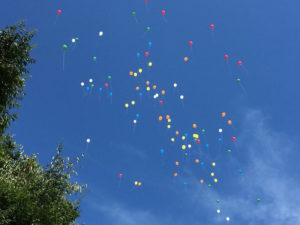 ”We are now starting to make initiatives to support LGBT community and we hope everybody can live freely and embrace sexual diversity in our city.” On August 10th, Kenji Ozeki, the mayor of Seki City, officially announced “LGBT-friendly Declaration” in front of City Welfare Center. As many as 100 people attended the ceremony and released rainbow-colored balloons into the air.

Seki City is the first municipality in Tokai Region that officially announces support for LGBT community. In 2013, Yodogawa Ward, Osaka declared the first declaration of support for LGBT community in Japan and Naha City in Okinawa, Takarazuka City in Hyogo, and Hashimoto City in Wakayama followed suit. ( Seki City is the 2nd city that has same-sex partnership certificate system, following Iga City in Mie.)

In March this year, Seki City invited Takeshi Ichikawa, the representative of an LGBT support group in Nagoya, “On The Ground Project” as a guest speaker and held seminars for local businesses to raise awareness of issues facing LGBTs. Mayor Ozeki started to feel that he wanted to support those LGBTs in struggle at work or at school by achieving better understanding among city officials and all the citizens. The declaration of LGBT support came in response to the mayor’s experience at the seminars.

This year, Seki City is planning to hold three seminars targeting city officials, teachers, and childcare-professionals to raise awareness of discrimination against LGBTs. Anyone living in Seki City will be allowed to join the seminars. The city has started up a new committee for LGBT support in the prefectural office. The prefectural office will consider revising the definition of “spouse” in its employee policies to allow those with same-sex partners to receive benefits of marriage leave and family payments.

In addition to that revision, the city will start issuing same-sex partnership certificates, revise the current systems of sex identification on documents and in public institutions, and make consulting systems for students and their parents at elementary and junior high schools. Businesses will be also asked to provide employees with LGBT- friendly workplaces.

”This declaration is just a kickoff. More initiatives are coming up. I would like to provide all the citizens with more opportunities to get to know LGBTs better.” Mayor Ozeki passionately spoke to the press.