Takarazuka City announced the introduction of guidelines for same-sex partnerships. 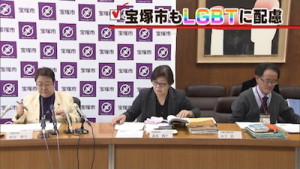 In Japan, Takarazuka City is the third municipality to issue same-sex partnership certificates after Tokyo’s Shibuya and Setagaya wards. It is the first city to recognize same-sex unions in Kansai region.

Takarazuka City established a working group for same-sex partnership certificates at the end of last April. However, there are some backlash against supporting gay people. Last June, a city council member, Shigeta Okouchi, denounced gay people as “source of HIV infection” in Takarazuka City. (Later on, Mr.Okouchi already withdrew his statement and expressed his apologies.)

Although the working group considered creating ordinances in their original plan, they decided not to do that. Instead, they decided to issue partnership certificates as Setagaya ward did. The members said “In Shibuya ward, same-sex couples need to make notarized documents to prove their relationships and they have to pay for the cost. The most important thing is we show our stance of supporting them. I want many of them to use this system. “

!Moreover, Takarazuka City is ready to take a further step for the supports for LGBT people along with the new guidelines. The city will provide school teachers, private hospitals, and real estate firms with educational trainings to achieve a better understanding of LGBT among them. The city is also planning to change the name of multipurpose restroom to “Daredemo Toilet,” which means “restroom for everybody,” distribute LGBT-related books to municipal elementary and junior high schools and offer consulting services to children.

The mayor of Takarazuka City, Ms.Nakagawa said,” I wants to send a message that ‘We care. You are not alone’ to everybody. It is our job to help same-sex couples living in struggle. Issuing partnership certificates is the first step and is necessary to make this city better for them. I would like to cooperate with other municipalities and legalize same-sex marriage in Japan in the future.”

Ms.Nakagawa recounted her experience when she met Aya Uekawa, a MTF transgender city councilor and Mr.Hosaka, the mayor of Setagaya ward. “I had some opportunities to know about LGBT people and started to wonder if there is anything I can do.”

A city councilor, Ms. Uekawa, who was invited by Ms. Nakagawa, delivered lectures about same-sex partnerships at the workshops for city councilors in May, 2014. Through the experiences, she started to wonder. “I talked about LGBT issues in Takarazuka City, but I didn’t do anything in my own municipality. I have to start something to realize same-sex partnerships in Setagaya ward.” In a way, we can say Ms. Nakagawa also contributed to the realization of partnership certificates in Japan.