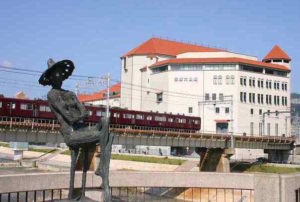 The certificate allows same-sex couples to become joint guarantors and sign surgical consent forms as a family member in hospitals.

Takarazuka City is now considering amending existing ordinances so that same-sex couples with partnership certificates can apply for municipal housings. The city also will ask private real estate agents to treat same-sex couples like other straight couples when they are looking for housings.

Last November, Takarazuka City made a declaration called “LGBT-Friendly City Making” and became the 3rd municipality that officially took a supportive stand for LGBT community in Japan. The same-sex partnership certificate system is part of their LGBT support called “City Making Policy For A City Where Everyone Can Be Truly Who They Are.”

Takarazuka City will keep its stand for LGBT community and is considering holding seminars and trainings for city officials in order to achieve better understanding of LGBT people among everyone in the city.

The personnel from Human Rights and Gender Equality Division said “we would like to support LGBT community and make these systems more helpful to the community.”