The word “LGBT” appears on school textbooks for the first time in Japan. 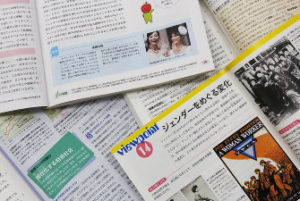 Home economics textbooks published by KAIRYUDO Publishing Co.,Ltd will have descriptions of inconveniences LGBT people experience such as gender norms. Same-sex marriage has not been legalized in Japan yet, but the textbooks will have pictures of openly LGBT same-sex couples having wedding ceremonies.

Home economics textbooks published by Jikkyo Shuppan Co.,Ltd will introduce the case of establishing a new ordinance and issuing same-sex partnership certificates, which is the first trial of its kind in Japan, in Shibuya ward, Tokyo. I explained in another column that same-sex couples are given legal protection in Europe and America. The textbook will have pictures of Koyuki Higashi and Yuko Masuhara, the same-sex couple that received a same-sex partnership certificate for the first time in Shibuya, Tokyo.

Muroi Maika, an LGBT activist known for her campaign “We request revision in textbooks that hurt LGBT youths. Do you know there is at least one LGBT student in your class?” said that “I am very happy that there will be more descriptions on LGBT in school textbooks, but some LGBT youths struggle with their sexuality and stop going to school or sometimes kill themselves. I hope textbooks in junior high school and elementary school will have descriptions on LGBT to avoid discrimination and prejudice at earlier ages.”
Likewise, Mameta, Endo, an LGBT activist, claims that “textbooks used in compulsory education need to have descriptions on LGBT.” This year is one chance in 10 years to revise the government education guidelines. The current education guidelines contains wrong descriptions such as “every one of us get attracted to someone of the opposite sex in puberty.” If they are not revised this year, it will hurt a lot of LGBT youths for the next 10 years. Mameta Endo also claims that “we need to send letters and emails to Ministry of Education, Culture, Sports, Science and Technology” to make a change for future LGBT youths. (Now, some committee members in charge of textbook revision also think they need to make textbooks contain descriptions on LGBT.)