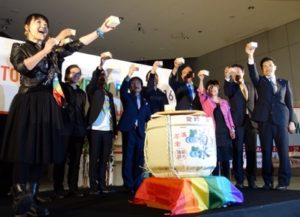 On April 30th, the opening reception of Tokyo Rainbow Pride 2016 was held at a cafe in Tokyo Metropolitan Government Building Observatories. People gathered to celebrate and kick off Tokyo Rainbow Week. Tokyo Rainbow Week was held from April 30 to May 8th.
Chiyo Abe, a famous commentator from Fuji Television Network, who was dressed in a GAP-sponsored T-shirt came to facilitate the reception. “LGBT- unfriendly Tokyo is so lame!” Her enthusiastic speech on LGBT measures in Tokyo left a strong impression as an ally on everyone in the reception.
Shinya Yamagata, a co-representative of Tokyo Rainbow Pride, declared open Tokyo Rainbow Week and the chairperson of Tokyo Metropolitan Assenmby(DP) and councilors from Komeito, Japanese Communist Party and Social Democratic Party came up to the stage and made a speech respectively.
After the speech from the councilors, Chizuru Higashi, an actress, Naoki Ogi, a queer education critic, Ken Hasebe, the ward mayor of Shibuya, and Nobuto Hosaka, the ward mayor of Setagaya came up onto the stage and celebrated the beginning of Tokyo Rainbow Week by saying “Happy Pride!” The celebration was done in “Kagamibiraki” style, a Japanese traditional celebration method with “Tsunodaru” a barrel of liquors.
After the talk session “LGBT Mirai Meeting in Metropolitan Government Office,” Aya Kamikawa, an assemblywoman from Setagaya Ward, Taiga Ishikawa, an assemblyman from Toshima Ward, Wataru Ishizaka, an assemblyman from Nakano Ward, and the president of CHEERIO, one of the main sponsors of Tokyo Rainbow Pride 2016, also came up to the stage and made a speech respectively.
At the end of the reception, “SECRET GUYZ,” the first Japanese FTM idol group and “Onaspelmermaid” one of the most famous Japanese drag queens gave a great performance and the reception got really lively.

During the period of Tokyo Rainbow Week, many kinds of events such as symposiums, talk shows, workshops, and photo exhibitions were held in Tokyo. There was a book fair called “Books About LGBTs” in Kinokuniya book store, Shinjuku. 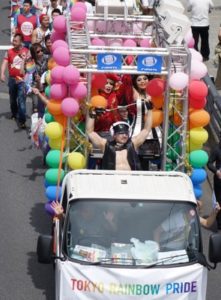 Then, Tokyo Rainbow Pride 2016 was held in Yoyogi park at the end of Tokyo Rainbow Week, on May 7th and 8th. About 4,500 participants marched through Shibuya Ward, waiving rainbow flags and banners. This year, Tokyo Rainbow Pride successfully ended with new records with about 4,500 marchers and 70,500 participants.
There were more than 100 booths lining up in Yoyogi park and many of them were run by businesses in Japan. During the parade, 18 floats were fabulously marching with about 4,500 people, which is the highest number in Tokyo Rainbow Pride history. Many performers, drag queens and GOGO boys were also asking for donation around the stage. This year was terrific. The participants enthusiastically gave it up for Caroline Kennedy, the United States Ambassador to Japan and Anne Barrington, the Ambassador of Ireland to Japan when they came up to the stage for their speech. Caroline Kennedy said in her speech “Young people need to know that there are people who love them the way they are. […]And everyone should be able marry who they love.”
Then, here comes the biggest part of Tokyo Rainbow Pride 2016, a live performance by Chara, a Japanese musician. Everybody enjoyed singing her greatest hits at that night. Tokyo Rainbow Pride 2016 successfully ended with a smile on everybody’s face regardless of nationality, ages, sex, sexual orientation and sexual identity. HAPPY PRIDE FOR EVERYONE!