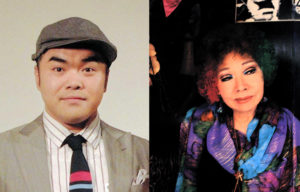 On April 26th, the entire LGBT community in Japan grieved at the sad news that two openly out television talents passed away.

One of the two is Ken Maeda, an openly gay television talent, who became very famous for his funny mimicry of Aya Matsuura, a popular Japanese idol in 2004. Ken Maeda appeared in a variety of comedy shows and released his own songs and novels. They all became smash hits. He also played an active part as an actor and a movie director. In 2005, he openly came out in his book and unlike other gay television talents, he never stopped performing in events held at 2 chome.

On April 25th, Ken Maeda was found unconscious on the street in Shinjuku and was carried to the hospital in a state of cardiac arrest. On SNSs, a number of people were worried about his condition. “I can’t stop thinking about him. I hope he’s okay.” This kind of comments were everywhere on SNSs. However, unfortunately he passed away on the following day. He was 44 years old.

Many people left flowers on the street where he was found unconscious and mourned over his death. A lot of television talents also expressed their grief on TV. No other television talent was loved more than Ken Maeda in 2 chome. My heart aches and is filled with sorrow. He was too young to die.

After the death of Ken Maeda, another sad news came in to LGBT community. Masako Togawa, an openly bisexual television talent, passed away because of stomach cancer. She was 85 years old.

Masako Togawa played an active role as a Chanson singer at the legendary cafe, “Ginpari,” for Japanese Chanson singers. In1962, she made her fabulous debut in the world of letters with her first mystery novel named “Oh -naru Gen- ei”(Grand Illusion) and won Edogawa Ranpo Award. In the following year, her novel named “Ryo-jin Nikki”(Hunting Diary) was nominated for Naoki Award and became a movie later.

Ms. Togawa was one of the most active transgender writers who focused on homosexuality and transponders in the post-war years. Moreover, she was highly admired by LGBT community when she posted pages of her LGBT-supportive opinions on “Fujin Koron,” a Japanese magazine.

In 1967, she opened her own legendary Chanson salon “Aoi Heya”(Blue Room). She actively opened positions to gay people. The Chanson salon is considered to be the milestone for night bars for lesbian people in Japan. Ms.Togawa appeared on TV shows a lot. She publicly came out as a bisexual on TV in 1999.

If Akihiro Miwa were the first queer television talent who had put a milestone for future LGBT television talents, Ms. Togawa would be a female version of Akihihro Miwa. Surely, she is one of the most representative LGBT community icons in the post-war era in Japan.