Ryukyu Asahi Broadcasting Corporation’s media report said Urasoe City, Okinawa, issued “Rainbow City Urasoe Declaration” on New Year’s Day. The declaration is aimed at embracing sexual diversity in the city. On January 4th, the city hosted a ceremony in front of the city office and a rainbow flag was raised with the city flag. Yodogawa City, Osaka, issued a declaration for LGBTs and other local cities, such as Naha City in Okinawa, Takarazuka City in Hyogo, Hashimoto City in Wakayama, and Seki City in Gifu followed suit. Urasoe City is the 2nd city in Okinawa that has official support for LGBTs.

The following is the full text of “Rainbow City Urasoe Declaration.” It was written with the help of local LGBTs.

These are the rights we all need to live true to ourselves and live happily as human.
No one can take the rights away from us. Embracing sexual diversity makes our society flourish peacefully and leads to the protection of our basic human rights.

No discrimination and no prejudice. We will keep shining like the “ti-da”(the sun).
We hereby declare that we will embrace sexual diversity in our city, Urasoe. 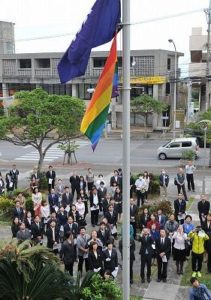 “We have seen many local governments recognizing same-sex partners for the last few years and Naha City has already taken measures for them in Okinawa. I hope other local governments will follow suit.”Mayor Tetsuji Matsumoto said.

Along with the declaration, there will be a book fair in Urasoe City Library to raise awareness of sexual diversity among the locals. The book fair will take place until January 29th.

The city is planning to start gender education at schools. The budget for the program will be collected through “Furusato Tax System.”

Speaking of which, Mayor Matsumoto goes to the valley ball tournament, “Okinawa SUMMER CUP” held in Urasoe Public Gym by a local gay bar. He makes a speech there every year. That’s fantastic. There is no gay bars in Urasoe City, but Naha City is next to it, so it’s very convenient. I think there will be more sport events held by gay people in Urasoe City.