”We are now starting to make initiatives to support LGBT community and we hope everybody can live freely and embrace sexual diversity in our city.” On August 10th, Kenji Ozeki, the mayor of Seki City, officially announced “LGBT-friendly Declaration” in front of City Welfare Center. As many as 100 people attended the ceremony and released rainbow-colored balloons into the air.  Seki City is the first municipality in Tokai Region that officially announces support for LGBT community. In 2013, Yodogawa Ward, Osaka declared the first declaration of support for LGBT community in Japan and Naha City in Okinawa, Takarazuka City in
Read More 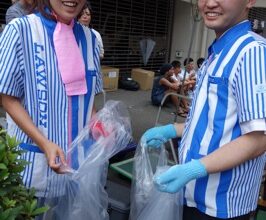 LAWSON, INC. is to improve its working conditions for LGBT employees.

LAWSON store staff cleaning up the street at Tokyo Rainbow Festival The Nikkei reported LAWSON, INC., the second largest convenience store in Japan, started a new team aimed at improving its working conditions for LGBT employees. The team consists of four employees from the personnel department and is striving to achieve a better understanding of LGBTs among all the employees. The new team invited experts in LGBT issues to its first in-house seminar and approximately 50 employees working in the headquarter learned a basic knowledge of sexual diversity and the issues facing LGBTs in the workplace in Japan and in
Read More